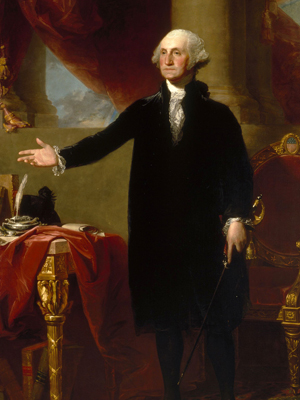 George Washington was a patriot, U.S. President, and Freemason who zealously labored to uplift humanity through the advancement of Masonic principles.

George Washington was born in 1732 in Virginia, the son of a tobacco planter among the newly emerging colonial elite of the American colonies. George Washington became a Freemason in 1752 at the age of 20, in a Lodge in Fredericksburg, Virginia. Masonic ideals and aspirations would influence him throughout his life. He held the craft in high esteem and was seen as an archetypal Mason by most Masons in colonial America.

George Washington became a military officer in 1752, the same year that he was entered into the craft. During the French and Indian war to protect the American colonies from falling into French hands he was leader of the Virginia militia, and after the war was over he was the most respected military officer, and gentleman in Virginia. When the American Revolution began, he was most people’s first pick for commander of the Continental Army. During the war he distinguished himself as a competent and masterful commander, keeping the Continental Army together through defeat after defeat, until final victory was attained at the Battle of Yorktown in 1783.

After the war he became the first President of the newly created United States of America. He served with distinction in this role as well, setting a tradition of stepping down from power after a set amount of time, in order to ensure that the U.S. did not become a hereditary monarchy or dictatorship.

George Washington is quite possibly one of the most famous Freemasons in American history. He is one of the great paragons of liberation, of gentleman farmers, and warrior scholars in the canon of history. His reputation and mythos soars above almost all other Freemasons.