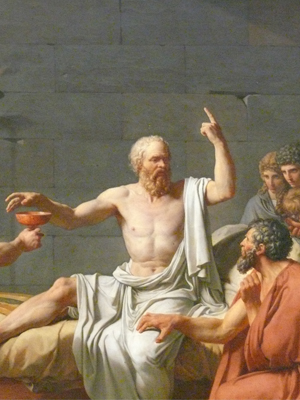 Philosophy as the True Love of Wisdom

Bearing the Torch to Illumine the Human Mind

Philosophy is an ancient human tradition. It is the practice of the contemplation of Nature and Science and has been a companion of the Mystery Schools since their inception. It is a living, breathing organism and has as its beating heart a conversation that has been carried on for millennia. This conversation is the conversation of human history, of the great minds of humanity speaking to one another across the centuries, and represents the exponential creation of human wisdom.

Philosophy, at least in the West, largely begins with the Greeks. This is not to negate the philosophers of antiquity, the sages of India and the Far East or the wise men and women of Egypt and sub-Saharan Africa. Truth-seekers and thinkers of remote cultures remain unknown to us and those philosophers of the early Mediterranean were certainly influenced by an older tradition of wisdom but the philosophy of the West – and Freemasonry is a Western Mystery Tradition – originates with the giants of Greek Philosophy.

Beginning with the Milesian School in the 6th Century, Greek philosophy marks the start of the Western mind’s recorded contemplation of the Universe. Philosophers such as Thales and Anaximander were obsessed with the elemental nature of the Cosmos and with finding the quintessential element from which all things are made. The Greeks had attempted to penetrate the mystery of Nature for centuries before Pythagoras, a mystic initiate of the Egyptian schools , who revolutionized our thought by his truly prescient insight into the mathematical nature of reality, a concept that our present-day physicists are still illuminating. He established a school of initiation that dispensed his philosophical teachings to men and women alike and until it was burned to the ground by an ignorant mob it remained a center for mystical instruction for decades. From this school emerges Socrates and his student Plato, two philosophical giants who would form the foundation of Western society to this day and who laid the groundwork for the emergence of the philosophies of Atomism, Cynicism and Skepticism.

Several centuries later, Zeno of Citium emerges and extolls the virtues of Stoicism, the philosophical backbone of the Roman Empire and of Freemasonry itself, a philosophy of Logic and Reason that encouraged the individual to form a personal ethical system and obey it ruthlessly and without compromise. Marcus Aurelius, philosopher king of the early Roman Empire, would march this philosophy across the Mediterranean world and leave its influence wherever he reigned. Following in the footsteps of his legions were the Mithraic cultists, who established secret lodges, dedicated to the veneration of their warrior god and patron saint of virtue, Mithras.

With the rise of Christianity and the fall of the Roman Empire came the early Church Fathers and the ideas of Theurgy and the emergence of Neoplatonism. Centered around the study of the human soul, Neoplatonic ideas were an ideal philosophical counterpart to the recent revelations of the Christ and would accompany the more mystic strains of Christianity as they would morph over the centuries into Gnosticism. As pilgrims flooded to the Holy Land, they came into contact with the ancient philosophical traditions of the Arabians and Islamic wise men. Astronomy, chemistry, mathematics and theology were reintroduced to the Christian culture whose progress had been stunted after the fall of the Roman Empire and the descent into the Dark Ages.

This meeting of philosophical hemispheres once more ignited the flame of the mysteries with the establishment of the Knights Templar, the Knights of Malta and numerous other esoteric and chivalric orders who were dedicated to the preservation of the Christian faith and philosophy. It has been claimed throughout history that such orders were no mere warrior monks but instead the discoverers and inheritors of mystical teachings and philosophies that led them to seek the answers to ancient questions in the deserts of the Holy Land. Upon their return to Europe from this campaign the Gothic cathedrals were raised by the Operative Freemasons and themselves served as centers of wisdom and learning for the Christian philosophy to develop. As the Renaissance era began to emerge, philosophy once again flourished in the Western World. Machiavelli, Copernicus, Galileo and many others lent their pens to the continuing conversation of philosophy, all amidst a climate of mystery and intrigue as secret societies and initiatic rites emerged across Europe. The Alchemists, the Rosicrucians and the newly arrived Ismaili mystics and Kabbalists of Judea all informed and inspired the budding philosophy of the Renaissance. Francis Bacon, polymath, court spy and philosopher extraordinaire was also rumored to be a member of both the Rosicrucian Society and the Freemasons and his work The New Atlantis has left historians and Masonic scholars alike with many puzzling clues as to the true origin of his philosophy.

The exuberance and extravagance of the renaissance eventually gave way to the rationality of the Enlightenment era of philosophy. This was an age of scientific advancement, of the practical application of the teachings of philosophy and the ideas of the mystics. It was from this time that such great scientific, creative and literary minds as Sir Isaac Newton, John Locke, Mozart and Voltaire extolled the virtues of the Craft in their various works by allegory and symbol. Not only did science and philosophy flourish at this time but Masonry was itself undergoing its Speculative transformation and its initiates would go on to lead revolutions in politics science and literature. It was the Enlightenment fervor for Truth and Reason that would eventually lead to a resurgence of mystical philosophy in the late 19th and early 20th centuries with the birth of numerous occult societies and culminating with the creation and expansion of the Theosophical Society – an organization dedicated to the harmonious uniting of philosophy, science, faith, mysticism and occultism.

Throughout history, Philosophy has marched hand in hand my Mystery. Wherever there have been initiates of those ancient traditions of humanity that seek to elevate the soul and quicken evolution, there has also emerged philosophy and a burning desire to know, once and for all, what it is that lies at the center of the great Mystery we find ourselves experiencing. As long as there are human minds to contemplate this great conundrum, both Philosophy and the Mysteries shall endure, and each shall inform the other as they uplift humanity together.