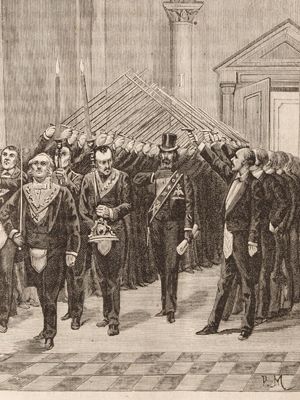 Becoming united in the labors of the Great Work

When a Masonic Body, whether a single Lodge, group of Lodges, Grand Lodge, Supreme Council or other Supreme Body wishes to accede to the United Federation of Lodges and be counted among its members it must first submit a written application for the consideration of the Supreme Council of Universal Co-Masonry. This application must include the following:

All such requests shall be considered as candidates without distinction of race, gender, religion or creed.

After the Application has been received and considered by the Supreme Council a period of negotiations between the Federation and the Applicant shall commence. At this time the Supreme Council will investigate the Applicant to determine the current situation and determine which necessary benchmarks will need to be achieved by the Applicant before their Accession is accepted. These benchmarks are based upon the Accession Criteria, a series of Masonic landmarks, traditions, requirements and customs that must be accepted by the Applicant before their membership in the Federation shall be granted. Some of these criteria are non-negotiable while some can be adjusted to allow for the cultural and legal practices of the locality in question.

Once negotiations have concluded satisfactorily, dates are established for fulfilling the necessary reforms required by the Accession criteria and a plan is set in place for the timely implementation of the agreed upon changes. Once the benchmarks of this plan have been achieved an Accession Treaty will be drafted and shall not become Masonically binding until a formal vote of both the Supreme Council of Universal Co-Masonry and the governing authorities of the Applicant within their respective Obediences has been taken and has been settled in the affirmative. If this stage is completed, the members of the Applicant shall swear oaths of fealty to the Supreme Council and their membership in Universal Co-Masonry shall have been established.