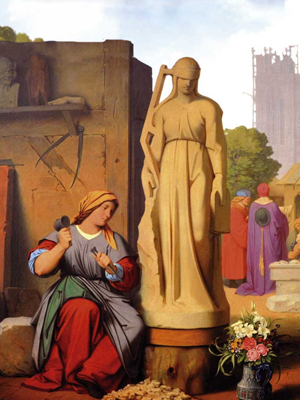 Uniting Humanity Under the Mysteries

Men and Women Working Together to the Glory of God

Freemasonry is, in its own words, a champion of the liberties and freedoms of all human beings. Its teachings espouse at every turn the philosophy of unity, the fundamental equality of all human beings under the Divine. Its traditional form, however, is also hypocritical in this regard. For a little over three hundred years, half of the human race has been officially excluded from the most profound mystic tradition of the Western world. Malecraft Freemasonry, that branch of Freemasonry that does not allow women to join its ranks, has persisted in the antiquated notion that women are not to be included in the mysteries and privileges of Freemasonry. It would be at least understandable if some biological or psychological reason could be given but no better excuse is offered than that it is simply against the rules and that such outdated restrictions could not possibly be changed at this late hour.

Universal Co-Masonry whole-heartedly rejects the notion that women are incapable of becoming Freemasons and admits women into its ranks on equal footing with men. It is not the only Order or Masonic Obedience to believe this. Despite the protest of those who believe Freemasonry to be the exclusive domain of men and men alone, there are numerous historical examples of the involvement of women in Freemasonry dating back centuries. The Regius Manuscript, one of the oldest Operative Masonic documents, contains mentions of women as participants in the operations of the Craft. Sabrina Von Steinbach, daughter of Erwin von Steinbach and a skilled craftsman and operative mason in her own right, who legend holds as having completed the carving and decoration of the porch of entrance of the Strasbourg Cathedral herself. The Old Charges themselves make direct mention of “hee or shee that is to be made a Mason”. Often explained away as a mistranslation, this reference in the York manuscript No.4 is in fact supported by a raft of historical evidence of female participation in both Operative and Speculative Freemasonry.

Even since the establishment of the United Grand Lodge of England and the formalization of female exclusion, Freemasonry has not remained solely in male hands. The first Masonic Obedience known to have admitted women on equal footing is the Egyptian Rite of Cagliostro, whose 96 degrees were open to women as well as men. This rite, conjoined to other degree structures by Giuseppe Garibaldi in the 1880s to form the Rite of Memphis-Misraim, still operates to this day. The order of Women Freemasons, a female-only Obedience founded in 1908 in London as a response to the theosophical leanings of the decades-older Le Droit Humain (Co-Masonry) and a desire to return a more English style of traditional Freemasonry, has carried the torch of female Freemasonry in England for over a century. The Grand Lodge of France, always a center of more liberal opinions, not only served as the origin of Le Droit Humain, the precursor of Universal Co-Masonry but has been the home of many mixed and female lodges since the revolutionary initiation of Maria Deraismes and granted the formation of the Women’s Grand Lodge of France in 1952

Universal Co-Masonry believes that the philosophy of Freemasonry contains within it only unity and at every turn instructs its initiates to mend the pointless divisions that have reduced the capabilities and capacities of humanity for eons. Freemasonry, and the Ancient Mysteries before it, is engaged in the Great Work of the Alchemists – to reunite that which has been divided and return it to its source. Humanity has been divided and its power reduced by such pointless separations. How much time and life and beauty has been wasted and destroyed by the squabbling over arbitrary divisions that differentiate human beings who would otherwise be in complete accord? Nationalities, religions and political beliefs are important but cannot be allowed to conceal from us the fundamental truth of Life, that we are all connected under the Divine and that the laws of Nature apply to us all, equally.

There is much work to be done if this goal is to be accomplished. The damage to our collective psyche runs deep and old attachments are the hardest to discard. When faced with such a monumental task what wise craftsman would disregard half of his tools? If we as Freemasons are to help humanity, are women not included in humanity? It is entirely hypocritical to espouse principles of liberty, equality and universal fraternity from one side of the mouth while from the other denying the participation in those same works to half of the human beings of this planet. In order to have the intended effect, principles must be acted upon in their fullest realization, otherwise they become as doorways leading nowhere, intricately carved and beautifully decorated but ultimately serving no purpose.

Universal Co-Masonry has been true to its principles from the very beginning and was founded to enact with consistency the highest of Masonic principles: Solidarity. Le Droit Humain, the ancestor of Universal Co-Masonry, was the first Masonic Obedience in history to intentionally initiate a woman with the initiation of Maria Deraismes in 1882. Since that fateful day men and women have labored side by side under the banner of Universal Co-Masonry to the Glory of God and the Perfection of Humanity. This work continues today and shall continue long into the future and as long as there are willing men and women to serve this cause, the doors of the Temple of Universal Co-Masonry will remain open to all those who are able to answer its call until the world envisioned by the true teachings of Freemasonry has been established.