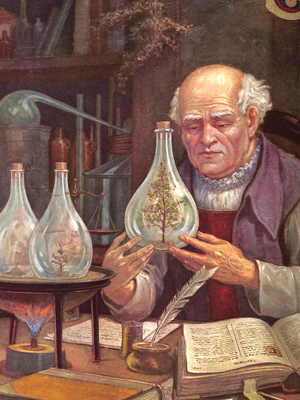 The mysteries of Substance, Form and Essence.

Alchemy is a profound system of spiritual, philosophical, and intellectual exploration. It has a rich and tumultuous history stretching across ages, cultures, religions, and social traditions. The origin of the word is more ambiguous than its history with the exact beginning unknown. However, through the writings of Plutarch and references elsewhere, a lineage can be drawn to Arabic and Greek heritages. In the Arabic al- means “the” and –Khemia, “land of black earth”; an ancient name, perhaps, for Egypt. The Greeks used -Khymatos to signify “that which is poured out”. Independent of the birthplace of the name alchemy, its obscurity comes as no surprise due to the perpetual mystery which has clouded this ageless art and led to its gross misunderstanding in modern times.

There are several forms of Alchemy due to its far-reaching influences and its diverse practitioners expanding from across the Old World into the New. However it is the tradition of Western European alchemy that Freemasonry bears a markedly close relationship to, with their shared journey beginning in the Hellenistic era moving through the Medieval and Renaissance times and surviving the tumult of the Age of Enlightenment, as well as the uncertainty of the contemporary era. Secular belief has reduced alchemy to an antiquated science unfit for the modern man, only valued as the predecessor to present-day chemistry. Alchemy, in truth, is much more than misperceptions and underappreciation. Like Freemasonry, it is a vessel carrying a great secret and maintains an occult message that if one is ready, one can perceive it in its infinite layers.

“Alchemy is a symbolic science of natural forms based on the correspondence between different planes of reality and making use of… symbolism to expound a spiritual science of the soul.”
~ Seyyed Hossein Nasr

With ears to hear and lips sealed, the Alchemical Freemason will find the hero’s journey ripe with symbolism and trials. The Masonic Lodge is not unlike the alchemist’s laboratory and the Mason, the substrate the alchemist works upon. Each degree a Freemason takes is both a microcosmic and macrocosmic experience of the seven steps (and more) of the alchemical journey. The microcosm is found within each degree with the Mason undergoing the prescribed experimental conditions inculcated in each particular ritual in the effort to raise base vibrations and to remove the impurities of material conditioning that obstructs the divine. The Mason willingly places himself in this cosmic crucible in the never-ending effort to perfect himself, the refining of the individual stone. The macrocosm is the culmination of all the trials and tribulations set forth by the Masonic degrees, taken in succession one after the other, for the purification of the substrate into the divine essence comprised within each person; the attainment of the Philosopher’s Stone.

“We are master alchemists: We may not have discovered how to make gold out of lead, but we are able to make heaven out of hell, hell out of heaven, and purgatory out of nothing.”
~ Khang Kijarro Nguyen

The philosophies of Alchemy and Freemasonry converge in a multitude of ways. There are, however, key aspects in which they differ. Alchemy is inherently individualistic, a road meant for the salvation of the one; whereas Freemasonry is a shared experience meant for the perfection of all. Alchemists rarely took part in the transmission of their art. They recorded their discoveries in symbolic language known only to the particular alchemist; knowledge being sequestered in their personal laboratory and library. Very few took on apprentices to continue their spiritual investigations and so little is understood from the works that remain. Extraordinary scientists like Sir Isaac Newton did not deem alchemy secondary to their scientific labors. Indeed, many were practitioners themselves and integrated alchemy into their empirical studies. Newton’s extensive alchemical work survives in part today, although there is great difficulty in interpreting his writings because of the aforementioned reason. Where alchemy excludes, Freemasonry includes and believes in the power of passing on knowledge and sharing one’s work. The pursuit of the alchemical Philosopher’s Stone by the Freemason—the stone that transmutes all spiritual impurities into the golden nature of the divine—is not sought after for the individual use but for the purpose of bringing all of Humanity forward in its evolution—solve et coagula!

“For the alchemist the one primarily in need of redemption is not man, but the deity who is lost and sleeping in matter.”
~ Carl G. Jung