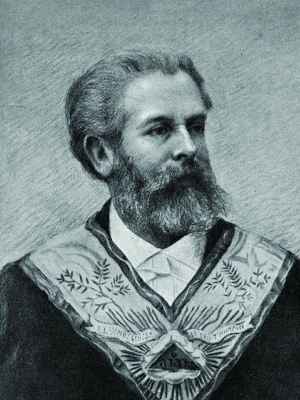 Georges Martin was a French physician, politician, and co-founder of the first Co-Masonic Order.

IN the decades following the founding of the United Grand Lodge of England and the publishing of Anderson’s Constitutions in 1723, the stricture against women being initiated into the ancient Craft of Freemasonry was accepted as Masonic Law. For many Co-Masons today, the fact that women can and do become full-fledged Freemasons is often taken for granted, and any opposition to this notion is rightly viewed as antiquated and obsolete. However, there was a time when such restrictions were almost universal, and the breaking of this taboo was seen as a high Masonic crime.

Dr. Georges Martin was a French physician, politician, and Freemason who would forever alter the course of the ancient Fraternity when he decided to challenge this idea. Born in Paris on May 9th of 1844, Martin came of age in interesting epoch. The French revolution had ended no more than fifty years before his birth, and the reverberating cries of “Liberty, Equality, Fraternity!” still haunted the streets of Paris. In 1861, he received a Bachelor of Arts degree; in 1863, he received a Bachelor of Science degree. Martin began his studies at the Faculty of Science at the University of Paris, but they were interrupted when he joined Army under the Freemason Giuseppe Garibaldi.

Returning from war, Martin finished his formal studies when he received a Doctor of Medicine degree in 1870. And, in the year of 1871, Dr. Martin moved his medical practice to Rue Mouffetard in Paris, and his popularity amongst his fellows led to his first of three elections, and in 1874, to the Paris City Council. As a politician, he worked to improve and provide public assistance to the most vulnerable citizens of Paris: the children, infirmed, and elderly. Thus, Bro. Georges Martin was a highly educated man, to whom many of the follies of his era, particularly that of female inequality, did not make sense. Later in his life he would write the following:

I have never understood why my mother, to whom I owe my existence, who has raised me, who has educated me, to whom I owe whatever I am, who, when I reached my civil and political majority had twenty-one years more experience than I, should be less and I should be greater, simply because I am a man.

Initiated into the Union et Bienfaisance Lodge of the Grand Loge de France on March 21st, 1879, Bro. Martin would go on to have a lengthy Masonic career as a founding member of the French Symbolic Scottish Grand Lodge, a French incarnation of the Scottish Rite of Freemasonry. Arguably, the most important moment in this career was the evening of January 14th, 1882.

For months, a storm had been brewing in the small Parisian suburb of Le Pecq, where Loge Les Libres Penseurs (The Free Thinkers) operated; there, the Lodge, having taken the revolutionary step of adding a provision to their by-laws allowing for the first time in Masonic history the open and acknowledged admission of women into the Craft of Freemasonry, was to admit Madmoiselle Maria Deraismes into the mysteries of Ancient Freemasonry on equal footing with the male members.

Before the Brothers brought her into the Lodge, the men nailed edicts to the door - clearly stating why they were assembled and notifying all as to their agenda for the evening:

Inspired by the potent and progressive Masonic spirit, searching for the light in every place where it can be found, making a truce with prejudice, we shall today initiate into our Masonic Craft, the eminent woman Mademoiselle Deraismes, whose intellect, talent, great learning, and steadfastness render her worthy to be admitted into our society…

Despite the known risk in attending such a meeting, Freemasons from across France descended upon the little Lodge to witness the momentous event. Among the “standing-room only” crowd, Bro. Georges Martin watched the proceedings, unaware, that evening’s candidate would later become his faithful collaborator. Together, Bro. Martin and Bro. Desraimes, established the first recorded Co-Masonic Order in the world. The Masonic scholar and writer, Bro. Arthur Edward Waite, would subsequently chronicle the event in The Builder Magazine (1917) stating:

IT is said that in or about 1879, several Chapters under the obedience of the Supreme Council of France, Ancient and Accepted Scottish Rite, revolted from that authority and re-incorporated themselves as La Grande Loge Symbolique de France. The rebellion, as usual, was fomented by the Grand Orient… One of the separated Lodges, the nature of whose dissatisfaction is shown by its title of Les Libres Penseurs, held its meetings at [Le] Pecq, a village in the department of Seine et Oise.

This Lodge on November 25, 1881, proposed that Mlle Maria Desraimes, a writer on humanitarian subjects and the rights of women, should be admitted to Freemasonry. The proposers were the W. M. Hubron and six other Master Masons. The initiation took place on January 14, 1882, in the presence of Brethren drawn from all parts. From her subsequent history, the candidate must have been also passed and raised, but there are no particulars in the sources to which I have had access.

After her initiation, Bro. Martin and Bro. Deraismes worked tirelessly to establish the Le Loge Symbolique Ecossaise Le Droit Humain – The Symbolic Scottish Rite Lodge of the Human Right – a Masonic organization that would later form the nucleus of Universal Co-Masonry. In founding, he and his Brethren proclaimed:

The Order wishes to interest itself principally in the vital interests of the human being on earth; it wishes above all to study in its Temples the means for realizing Peace between all nations and social Justice.... Claiming no divine revelation and loudly affirming that it is only an emanation of human reason, this fraternal institution is not dogmatic, it is rationalist.1

On February 6, 1894, Bro. Maria Deraismes passed to the Eternal Grand Lodge, leaving Bro. Georges Martin and his wife, Bro. Marie Martin, to continue their Masonic labors. The couple worked with diligence to spread the light of Co-Masonry across the world: a task which he persisted in until his own death in October of 1916. By then, Bro. Martin had lived long enough to see federations of his fledgling order established all over the world and their ranks swelled by men and women alike. His is a legacy of far-reaching insight and a truly principled approach to the philosophy of Freemasonry – philosophy that declares the equality of all human beings and that encourages each of us to venerate the Truth and live according to the Universal Moral Law.