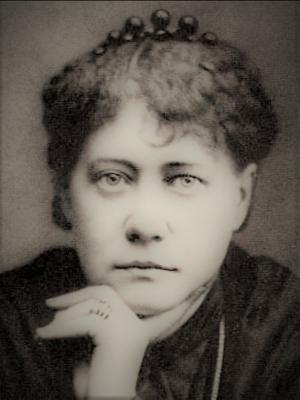 Brother H. P. Blavatsky was a brilliant and polarizing writer, Theosophist, and Freemason of the 19th Century.

Controversial, brilliant, and enigmatic, Helena Petrovna Blavatsky was a defining character of the 19th Century. A celebrity of epic proportions, Blavatsky’s activities and travels were chronicled by newspapers around the globe. Labeled as an esoteric pioneer, a charlatan, a powerful mystic, an ingenious impostor, a saintly genius, a hedonist, a Master of the Wisdom: the fascination that surrounded Helena was universal with her supporters and detractors each ardently engaged in vocalizing their opinions of her. Like all the great minds of history, Blavatsky was a polarizing figure—one who few understood or truly appreciated—for her true gift to Humanity is a clearer understanding of and unveiled view of the Truth.

None of the labels proscribed to her do justice to the genius, wonder, and mystery that she embodied during her lifetime. Perhaps the simplest way to describe Helena is to say that she was a woman born before her time. An educated, independent, wealthy woman, acclaimed author, spiritual adept, Brother H.P. Blavatsky lived outside the realms of the “polite society” of her day. Unconcerned with what others thought of her, Helena simply did her duty to Humanity as she knew best, regardless of ridicule or praise, both of which she received in innumerable measure.

In the modern world, we are surrounded by ideas, practices, and knowledge that Helena brought from the East to the Judeo-Christian oriented, Western World. Yoga, Sanskrit, Karma, Reincarnation, Buddhist philosophies, and ancient Hindu teachings: these treasures were unknown to Westerners until she crossed the veil in her travels, studied at the feet of eastern masters, turned to the West, and returned from whence she came—bearing the knowledge, wisdom, and experience to change our civilization forever.

“Modern Masonry is undeniably the dim and hazy reflection of primeval Occult Masonry of the teaching of those Divine Masons who established the Mysteries of prehistoric and prediluvian Temples of Initiation, raised by truly superhuman Builders.” — Bro. Blavatsky

Helena Petrovna von Hahn was born into an aristocratic family in a Ukrainian town, which was then part of the Russian Empire. She was the granddaughter of Princess Helena Pavlovna Dolgorukov. The Princess played a key role in her life and supervised her extensive education at Saratov and Tiflis in the Caucasus. Helena’s Great-Grandfather was a prominent Freemason, and she was first exposed to the Fraternity by reading about it in her Great-Grandfather’s vast personal library.

At the age of 17, Helena agreed to marry Mr. Nikifor Blavatsky, who was more than twenty years her senior. After three months of marriage, she was so unhappy that she repeatedly asked her husband to release her to return to her family. Nikifor finally acquiesced to her request, and Helena traveled with escorts to the Crimean Peninsula with the intended objective to re-join her Father.

Instead, she fled her traveling companions, bribed a ship’s captain, and traveled by sea to Constantinople. This daring escape marked the beginning of a nine-year trip around the world during which time she visited Turkey, Greece, Egypt, France, England, Canada, the United States, Mexico, South America, the West Indies, Ceylon, India, Java, Japan, and Burma. In London she met a mysterious Hindu man, known as Master Morya, who informed her that her mission was to travel to Tibet. Her first attempt to visit the country was unsuccessful as she was blocked from entering by the British Government, but Helena later wrote that her subsequent attempts in 1865 and 1868 were successful. Returning to Russia in 1860, she reconciled with her husband, and they adopted a baby boy whom they named Yuri. Shattered by dual blows of a serious riding injury that left Helena in a coma for months with a fractured spine and the death of their son at age five, their union was brief.

Once recovered, Helena left once more and returned to her world travels visiting Transylvania, Serbia, the Balkans, Syria, and Italy. In 1867, she was again injured when fighting for the Freemason, Brother Giuseppe Garibaldi, at the Battle of Mentana. In 1868, she returned to Tibet with Master Morya by ascending overland through Turkey, Persia, Afghanistan, and India. Entering Tibet via the Kashmir, the pair resided at the home of Morya’s friend, Master Koot Hoomi, until 1870, which was in close proximity to the Tashilhunpo Monastery. Blavatsky’s studies in Tibet included meetings with various spiritual adepts and the mastery of an ancient language known as Senzar. Once proficient, Helena translated a number of ancient Senzar written texts, which were meticulously preserved by the monks of the monastery.

In 1871, she embarked for Cairo, Egypt on the S.S. Eumonia, but the ship exploded near the island of Spetsai on July the 4th. Of the 400 passengers, Blavatsky was one of only 16 who survived the disaster. Unable to swim, she was pulled from the sea by an unknown individual but lost all of her possessions and money to the depths. Helena subsequently described the tragedy stating that she witnessed “limbs, heads, and trunks falling all around me.” Later, she traveled to meet again with Master Morya, who instructed her to go to the United States, and she arrived in New York City in July of 1873.

In October of 1874, she was introduced to a reporter named Henry Steele Olcott, who would become her dear friend and travelling companion and would assist her in establishing a new esoteric organization. Thus, in the autumn of 1875, they founded The Theosophical Society: an organization which advocated for the true unity of all humanity and rested upon the assertion that there is nothing higher than the Truth. It combined the wisdom contained in religion, science, and philosophy with the ultimate endeavor to aid in the evolution of human race towards its ultimate destiny of Perfection.

In addition to her myriad of accolades, Helena Blavatsky was also a Freemason. Her Masonic Diploma, dated the 24th of November 1877, reads:

Brother Helena later stated that she was “highly honoured by the distinction conferred upon me by Brother Yarker.” Sovereign Grand Master, Bro. John Yarker 33o was joined by the Order’s Grand Chancellor, Bro. M. Caspari 33o and Grand Secretary, Bro. A. D. Lowenstark 33o in issuing the proclamation from the orient of London, England. Whether we choose to acknowledge the tremendous gifts she gave Humanity, each person alive today is indebted to Blavatsky for her monumental zeal for spreading the light of wisdom, strength, and beauty across our planet. May her divine Light shine perpetual; may it illuminate even the darkest recesses of the world, serve as an ever-fixed guide for all those who seek the Truth, and lead Humanity ever upwards, towards the stars, the heavens, and into the great unknown.

“The Theosophical Movement includes all efforts that lead to human freedom and enlightenment. Masonry has played and is still playing an important part in the world. For first, its main idea is the Brotherhood of Man, even though in a limited and restricted sense; second, Masonry debars from its lodges all considerations of politics or religions, recognizing those to be the greatest provocatives of dissensions; third, it is the implacable enemy of religious intolerance... It was through Masonry and Masons that the United States of America was made possible.”  - Bro. Helena Blavatsky