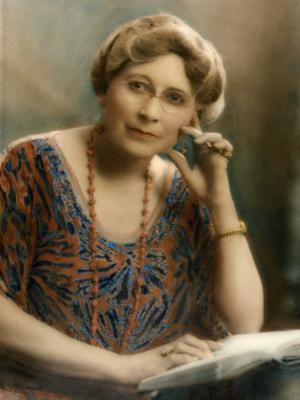 Marie “Helios” Russak Hotchener, perhaps best known for her contributions to Theosophy and Co-Masonry, was born Mary Ellen Barnard in 1865, in the small town of Four Corners, California. Little is known about her early life, beyond the fact that her father, Allyn Mather Barnard, was a Judge in San Francisco. She studied music at Mills College in Oakland, California, graduated in 1884, and began a career teaching music in San Francisco. However, to sing was her true passion, and almost immediately, she went into Opera. Over the course of her life, she would become famous for her performances, particularly in the works of Wagner. She would be invited to perform in Europe, and her Opera career propelled her into American and European high society.

It was in performing an opera singer that she met her first husband, Justin Harvey Smith, a famed academic who published many papers on the history of Texas and Mexico. They married in 1892, but were quickly divorced three years later in 1895, for unknown reasons. After her first marriage, Marie became a member of the Theosophical Society in 1898, which coincided with the time when the new ideas of Theosophy were sweeping the western world, particularly in the high society circles in which she traveled.

A year later, in 1899 and now in her early thirties, Marie married the opera producer, Frank Russak. We have few details of their marriage, however the couple quickly moved to Paris, and it was here that Frank would remain for the rest of his life, until his death in 1914, a casualty of shipwreck. During this time of mourning, Marie met Annie Besant in Europe, along with H. S. Olcott, with whom she had an instant connection. She would leave the high society world of Opera to become his secretary, and in 1906, left Paris to travel with Olcott to Adyar, India and the headquarters of the Theosophical Society. She would be there for his death in 1907, and she was one of the few who reported to witness a famed visitation by the Masters on his deathbed, who gave control of the society to Annie Besant.

Her involvement in and dedication to the Theosophical Society deepened, and in 1910, she returned to her native California, this time to Los Angeles. It is unclear exactly where she became a Co-Mason, and when, but it is highly likely that it was during this year. She would eventually rise to the 33rd degree and hold positions on the Supreme Council of Le Droit Humain and later the Provisional Supreme Council established for the Western Hemisphere when Paris fell to the Nazis.

It was in that pivotal year of 1910 that Marie received the name Helios, and that Bro. C.W. Leadbeater published his book, The Lives of Alcyone, which introduced the concept of “Star Names” to the public. A star name was a title bestowed to a particularly important soul, thought to re-incarnate into the group of founding Theosophists. To be given such a name was a symbol of status among the Theosophists, and Marie was fortunate enough to be identified as having one. Leadbeater identified the star name of “Helios” as belonging to Marie Russak Hotchener. This may be the reason Helios Lodge, in the orient of Los Angeles, remains one of the oldest Lodges still active in Universal Co-Masonry. It was so named and founded in 1910. Bro. Marie was known, until her death, as Lady Helios, Mother Helios, and simply Helios, by many Theosophists and Co-Masons, even signing her name as such on important documents.

In 1912, work on the Krotona Theosophical site began in Hollywood, and Bro. Marie was heavily involved, along with her future 3rd husband, Henry Hotchener, a real estate broker. Marie became the architect of many of the colonies buildings, and further assisted in the work by raising a large portion of the funds necessary for their construction. Her unique architectural style was heavily inspired by the architecture she observed in Adyar, India. Islamic, Hindu, and Old-World European styles were deftly combined in her work, which remain today as historic treasures in Hollywood. Her most famous house, Moorcrest, became the home of several movie stars, after the Krotona colony moved from Hollywood to Ojai, California in 1926.

In 1914, when her second husband, Frank Russak, drowned in wreck of the Steamship, Minnetonka, he left a quarter of his wealth to Marie. Recovering from the tragedy, she married Henry Hotchener in 1916. Like Marie, Henry was a prominent Theosophist and Co-Mason. They would both hold high Co-Masonic positions and would remain lovingly married until her death in 1945.

Her duties in Theosophy and Masonry grew with each passing year. Bro. Annie Besant placed a great deal of trust in her, and in 1930, named Bro. Marie the Editor of The Theosophist for the remainder of that year. Her skills so impressed Besant that Marie was given permission to publish her own Theosophical Journal, World Theosophy, from 1931 to 1933. During this era, Marie would continue her architectural work, while also finding time to write numerous articles for various Theosophical and Co-Masonic publications. As she transitioned into her golden years, while living in Los Angeles, she was summoned to her final and greatest duty.

In 1940, when Nazi armies overran Paris and the Supreme Council of International Co-Masonry unable to convene, a provisional Supreme Council was created in the United States. Bro. Marie “Helios” Russak Hotchener would serve on that Council, providing a guiding light for the Craft in its time of darkness. She would end her life as a highly achieved socialite, turned spiritual and Masonic worker, by keeping the organization together as the worst war in recorded history swept the globe. She would die two months before WWII ended, on March 4th of 1945. She passed to the E.G.L.. after a long life of service, devoted to the promotion of Wisdom, Truth, and Fraternity.

“Death is as simple a process as slipping off a glove.” – Bro. Marie “Helios” Russak Hotchener