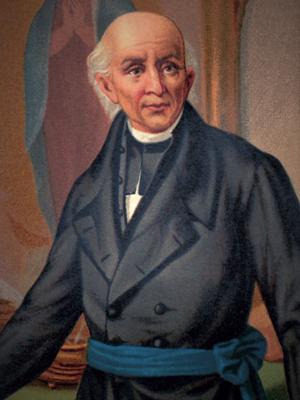 Known as the father of the Mexican nation, Bro. Miguel Hidalgo y Costilla was not only a Catholic Priest, but a fervent defender of human rights, justice, and promoter of Independence. He was born Miguel Gregorio Antonio Francisco Ignacio Hidalgo-Costilla y Gallaga Mandarte Villaseñor of well positioned and respected Criollo parents on May 8th of 1753 in Valladolid Michoacán, Mexico.  His father held a privileged position as an Hacendado (Hacienda Manager).  At the age of nine, he lost his mother impacting him greatly and his father focused and ensured his education via private tutors until he was of age to enter the seminary. After preparatory education, he attended the Royal and Pontifical University of Mexico earning his degree in philosophy and theology.  He was nicknamed “The Fox” in school for his cunning wit and sharp mind.

In 1773, he completed his education, and records indicate he was very well verse in the Trivium and Quadrivium.  As the son of an Hacendado, he learned native languages, in addition to Latin and French, and had an affinity to French literature, education, and ideas. He was ordained in 1778 at the age of twenty-five.  He was given a position at the University, and he taught from 1779 to 1792. The University of Valladolid, as one of the most importance educational centers for the Viceroys of the New Spain, was a hub of advanced ideas attracting the great thinkers of the time. During his tenure he served as Treasurer, Vice-rector, and Secretary, and later becoming Dean of the School in 1790 at the age of 39.

As a leader of this school, he was adamant to teach liberal ideas and for this he was ousted of his position and placed as a priest for several parishes in 1792.  It is believed that during this time, exposed to French Enlightenment-era ideas, when he was introduced to Freemasonry, although thin records exist of his Masonic journey. He was a member of the L… Architectura Moral of the York Rite where he received the Degree of E.A, F.C. and M.M.

While Hidalgo had a traditional education, he was from a well to do family exposing him to thoughts, ideas, and education not commonly available to his peers.  His education encouraged him to challenge the traditional religious and political status quo of the time. He questioned the absolute dominion of the Church, the ruling power of the Kings, the control of the Popes, and the strict rules of the Priesthood. He believed celibacy to be unnatural, and as such, he had multiple relationships and fathered several children. This last item brought him before the court of the Inquisition which dismissed any charges.  At heart, Bro. Hidalgo was an egalitarian and was known to open his home to anyone needing succor.

At the age of 50, he moved to Dolores Hidalgo as the priest of the local parish and turned over his clerical duties to his vicars to focus on commerce, intellectual, and humanitarian causes.  Miguel was an avid reader and student of literature and science, and he used this knowledge to assist the local native community to develop multiple and varied businesses to promote their independence from Spanish policies and economic hold.  All this time, while working with the community, he began speaking to anyone that would listen regarding the need to expulse the Spanish rulers and institute their own government. His ideas were met with a great deal of support from intellectuals of the time, liberal priests, and the poor. His leadership instigated the insurgent movement. As his campaign took hold, Bro. Hidalgo amazed a great army, and by taking small cities by surprise, they advanced the cause of Liberty.

In 1810, Bro. Hidalgo was named General and Supreme Commander of the Mexican Guerilla. On September 28, 1810, he arrived in Guanajuato, it was here where he took over the local Granary – symbol of the oppression and rule of the Spanish in Mexico – and ignited the Mexican Independence movement.