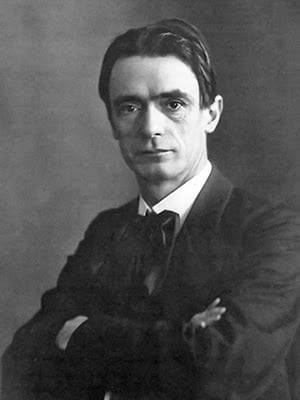 Brother Rudolf Steiner was a famed mystic, occultist, innovator, and scientist of the late 19th and early 20th centuries.

Rudolf Steiner was born in a poor, rural village in the Austrian Empire in 1861. His father, Johannes Steiner, was a gamekeeper for a local noble but left his service to marry the woman he loved, a marriage not approved of by his lord. Johannes frequently changed jobs through Rudolf's youth, eventually becoming a telegraph operator for the railways.

When Steiner was a young boy of 8 years old, he had what he claimed to be his first truly mystical experience. Discovering a book on geometry, he immersed himself in it, ignoring the physical world, and all its trappings to spend his days buried in abstract equations. At this moment, he would say he discovered a world beyond the physical.

The young Steiner was very mentally adept, impressing his parents so much with his mental capacity and learning that when he turned 18, they moved to Vienna so that he could attend the Vienna Institute of Technology.

Steiner quickly applied himself to as many advanced studies as he could, delving deep into philosophy, mathematics, chemistry, and any other science he had access to. Soaking all this information up like a sponge, he was still left wanting more.  He left the Institute in 1883 without graduating, feeling he had learned enough of modern science to satisfy his curious mind.

Steiner would work as a copy editor after school, editing and compiling many works of philosophy. It was in this career that he encountered the works of Johann Wolfgang von Goethe, which would forever change Steiner’s world view.

In Goethe’s work and philosophy, known as Goethean science, Steiner would finally find a vehicle capable of explaining the world beyond the physical - that he had experienced so many years before, as a child. Focusing on explaining phenomena more than just showcasing what could be independently verified, Goethian science spoke out to Steiner as the key to advancing beyond material science, which he had mastered in the university.

As a result of this exposure, which captivated his brain, Steiner began to explore the Esoteric. Rejecting mystical justifications, Steiner attempted to approach the occult scientifically and rationally, seeking to find higher truths, not just further dogmas. Steiner wrote his first great esoteric work, Die Philosophie der Freiheit, or The Philosophy of Spiritual Activity, in the eventual English translation, laying out the basis of the philosophy he would eventually create as Anthroposophy.

In this great work, he focused on defining the concept of freedom and laying out how to reach it. True freedom required bridging the gap between the internal world of ideas, and the world of outer reality. You must sharpen and clear your mind of the unnecessary so that you can clearly see the truth. Only in this way, by letting the highest inner morality inspire you, could you attain a life of true freedom.

Exploring and expanding his own Moral philosophy, Steiner came into the orbit of the now established Theosophical society, which had been founded by Helena Petrovna Blavatsky to explore and expand on ancient and powerful philosophies. Prominent Theosophists learned of Steiner's focus on an unseen world and his deep explorations of German philosophy.

Though no one knows exactly when or how Steiner came into Freemasonry, in 1906 Steiner became the Master of Mystica Aeterna Lodge, a part of the order of Memphis and Mizraim, which traces its lineage back to Cagliostro and the great alchemists of the late renaissance. He would write heavily about Freemasonry, its connection to the mystical symbols of the Rosicrucians, and the whole of Esoteric philosophy. Though all Masonic Lodges in Germany would be closed in 1914 at the outbreak of World War I, Steiner continued to be influenced by Freemasonry throughout the entirety of his life and writings.

There were two deep philosophical differences that, in 1913, led to the German section splitting off from the Theosophical Society, and becoming Steiner’s Anthroposophical Society. The first was the focus of the Theosophical Society on finding the truths in the ancient texts of India. Steiner, while not objecting to these explorations, found there to be a great wealth of knowledge hidden in the Western Esoteric tradition as well. The second issue was the promotion by Annie Besant and the main theosophical society of the idea that Krishnamurti, a young child discovered in India by C.W. Leadbeater, was the next incarnation of the Christ. To Steiner, the Christ coming to Earth was a unique and pivotal event, and when he returned it would be the return of his spirit to relations among people; it would not be in a physical body.

The new Anthroposophical Society continued the work of exploring the esoteric and constructed the Goetheanum, a lecture hall, administration building, and artistic center to be the heart of the Anthroposophical society. Though destroyed by arson in 1922 (possible by the newly emerging Nazi party), a second Goetheanum was built which still stands and is the site of educational lectures to this day.

After World War I, in 1919, Steiner carried forward his own philosophy that one had to bring ideas into manifestation in the real world, by founding a number of practical initiates to improve the lot of humanity. He established a new way of schooling, which came to be called the Waldorf approach to education. It was similar to the approach of the Italian educator, Maria Montessori, another Theosophist, in that it aimed to follow the child’s natural development.

He also founded several other initiates, including biodynamic farming, the foundation of modern organic agriculture, and Eurythmy, an exercise system based in music and dance. He would pioneer holistic medicine practices as well, relying on the patient’s own ability to heal, and natural cures, in combination with the achievements and practices of modern, western medicine.

He also put forth his own political ideas, which came into direct conflict with the emerging Nazi Party of Adolf Hitler. Steiner advocated for governments not based on ethnic groups, but on geographical regions that made sense. He advocated for the threefold organization of society, where the cultural, political and economic functions of the government each operated autonomously for the betterment of the whole.

His rejection of Nazi race superiority theories caused him to be run off the stage many times by the emerging brown-shirts, however, he kept lecturing, promoting his ideas of freedom and spiritual enlightenment through scientific exploration and western esoterics, even as his health worsened. In 1923, he was considered by many to be in too weak a condition to travel, yet he followed his own philosophy, imposing his will and ideals on his physical body, and continued at a high pace until 1924 when his body finally gave out. He spent the last months of his life writing his autobiography, before finally passing out of this world on March 30th, 1925, at the age of 64.

Up until his last moment, Steiner fought to dispel ignorance and arm people with the tools to seek the truth. His heroic efforts have left a legacy of improvements to humanity that are still felt today, from his schools to his medicine, to the agriculture he advocated. His contribution to the Western Esoteric tradition is arguably comparable to Helen Petrovna Blavatsky, and as of 2015, the Anthroposophical Society had over 40,000 members worldwide.