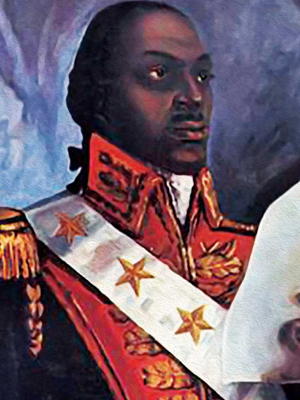 Toussaint Louverture was a liberator, military leader, and Governor General of Haiti who drafted the Constitution of the republic with Masonic principles ensuring its future autonomy.

While many of the great liberators of humanity have gone down in history as icons of civil evolution, many more have been swept away in time despite their valiant achievements. Freemasonry teaches its initiates to always fight for the cause of human freedom, whether we are recognized for this work or not. Toussaint Louverture was one such brave soul, fighting tirelessly for the independence of his native Haiti. He was perhaps the most influential force in bringing about their ultimate liberation from both imperial France and the evils of slavery.

While records from the era are scarce, it seems that Louverture was born a slave on the Breda plantation, allegedly the great grandson of the King of Allada in modern day Benin. It is estimated that Louverture was born sometime between 1739 and 1746. According to a marriage license, Toussaint gained his freedom in the year 1776 at the age of 33, but the authenticity of this document cannot be confirmed. While there is no direct evidence for Toussaint’s membership in Freemasonry, several documents bear his signature accompanied with Masonic symbols that would have been unknown to the uninitiated at that time due to the limited availability of information on Freemasonry. The membership in the Craft of several of his close comrades, both black and white, has been confirmed and it is unlikely that Toussaint would not have been invited to join the fraternity by the men under his command.

When tensions began to boil between slaves seeking freedom and their colonial masters around the time of the French Revolution, Louverture took up the call to fight for the liberation of his people and nation. Beginning as a lieutenant in one of the leading resistance groups, he soon found himself in command upon the execution of his former general. Battling the new French government for control of the island, he demonstrated a natural ability for leadership and decisive action both militarily and diplomatically. In a series of stunning military victories, Louverture turned back the superior armies of the French and British colonists and won the hearts and minds of the newly liberated Haitian people. He was named Governor General of Haiti and drafted a constitution that would ensure autonomy from outside authority for the future of the new republic.

Fearing the strength of a united Haiti, Soon-to-be Emperor Napoleon Bonaparte sent an expedition of 1,000 elite French troops to the island that would ultimately arrest Louverture and take him back to France, where he would die in prison. Though Louverture’s legacy would be undermined in the period shortly after his death by his successors, it has withstood the test of time and he is today remembered as one of the nation’s heroes and the greatest force in bringing about its independence. In Toussaint Louverture, we find a true example of an inspired Mason seeking freedom and fraternity above all else. Louverture’s dedication to his cause and to the well-being of humanity in the end cost him his life but in death his memory has inspired the oppressed around the world to do more than he ever could alive.